The Bert Mason – Lions Humanitarian Award is presented for exceptional service for humanitarian needs. Nominations may be made for any Lions, Lioness or Leo, who has served Lionism for at least a year and a day.

Details of the criteria for entry and application process are in the following document.

About Bert Mason, Past International President 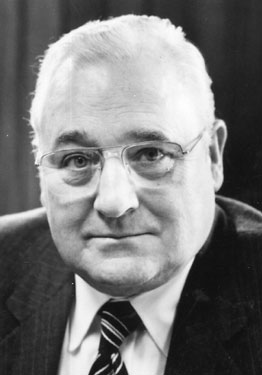 International President is the highest office within Lions Clubs International. Bert Mason, of Donaghadee, Northern Ireland, served for a one-year term as president of the International Association of Lions Clubs following his election at the association’s 67th International Convention, held in San Francisco, California, USA, 4-7 July 1984.

He became the third European to become International President – and the only Lion from Multiple District 105 to have had the honour of leading the world’s largest service organisation.

Past President Mason was the chief executive officer of a premier printing and packaging company. A Lion for over 40 years, Bert Mason was the charter president of the Belfast Lions Club, which became the first Lions club formed in Northern Ireland in 1959. He was the first district governor of District 105-I, consisting of Northern Ireland and the Republic of Ireland. He was also elected as an International Director, held the offices of zone chairman, deputy district governor, chairman of the Council of Governors of Multiple District 105, British Isles and Ireland, and served a two-year term as a member of the association’s board of directors from 1976-78.

In recognition of his many contributions, Past President Mason received the 100% District Governor Award, an Extension Award, and 22 International President’s Awards. He was also presented with the Ambassador of Good Will Award, the highest honour bestowed upon association members. In addition, Bert Mason was a Melvin Jones Fellow.

Past President Mason passed to higher service in 2007. Bert and his wife, Beryl, were friends of many Lions within the multiple district and across the world.