As of July 2019, the Multiple District comprises eight districts. Each elects a District Governor (DG) who serves for a year, starting in July. Together, these eight Lions constitute the Council of Governors (CoG), who serve and govern Multiple District 105: British Isles.

The CoG is supported by the Council Secretary and Treasurer, as well as a small number of staff, and a team of MD officers. One of the first tasks of the new Council of Governors is the appointment of officers in the Global Action Team (covering leadership, service, and membership) and for functions including IT and communications. 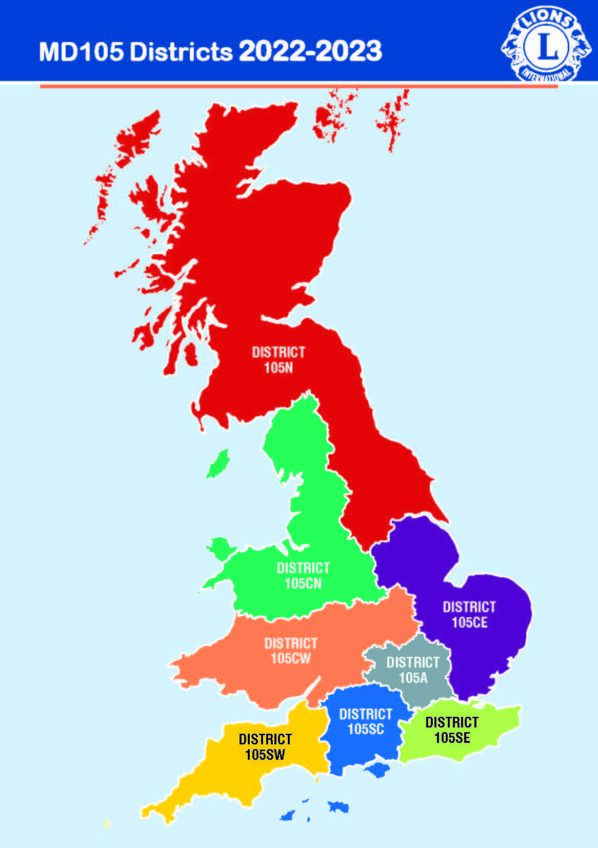 Lions Clubs International requires every district throughout the world to hold an annual convention, attended by club delegates and other Lions members. District Conventions involve a business meeting where the new district governor and vice district governors are elected, district annual accounts are approved and subscriptions agreed, and reports of the work of the district cabinet officers are presented. In addition, clubs may raise issues and/or propose changes to district practices for debate.

District Conventions are not simply formal AGMs, as they offer an opportunity for Lions to meet up, exchange ideas, and enjoy social activities. Interesting speakers may be invited to talk about their work or other topics. Open forum sessions are held and informal connections between Lions and their clubs are made.

The Multiple District of Lions Clubs in the British Isles (MD105) comprises clubs located in Scotland, England, and Wales, plus the Isle of Man and the Bailiwicks of Guernsey and Jersey.

In 2017, District 133 Ireland was established and replaced District 105I which was formerly part of the Multiple District (MD105) that also included Lions clubs in Britain.